What if: Matt vs Matt 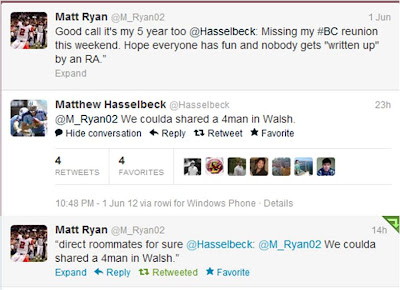 The above is a twitter exchange between Matt Hassellbeck and Matt Ryan. It's a harmless series of tweets but it got me thinking about what if the Matts had been on campus at the same time.


Outside of their NFL pedigrees, the Matts had a lot in common. Both were tall, well-rounded recruits from Northeast private schools. Both had decent offers aside from BC, but neither were considered top recruits. But where I think their BC careers become very similar is their ability to shine through QB controversies.

Hasselbeck earned starts as a redshirt sophomore. Only the following season saw him lose his spot in the preseason to Scott Mutryn. Hasselbeck persevered, pulled out a game in Hawaii and never looked back.

Ryan also endured a frustrating QB controversy. He won games as a back up, lost his job when Quinton Porter came back and then earned the job back. As we know, once Ryan earned the job, it was his for the next two and a half years.

But what if...what if Hasselbeck and Ryan had competed for the BC job at the same time. Who would have prevailed in this hypothetical QB controversy? Both could take big hits. Both proved they could adapt to new offenses. Both had the leadership intangibles. It would be a tough choice. Hasselbeck was more mobile. As a college player, Ryan had the better arm and proved to be great under pressure. I think if it came down to it, I would have to go with Matty Ice.

Email ThisBlogThis!Share to TwitterShare to FacebookShare to Pinterest
Labels: matt hasselbeck, Matt Ryan, what if

Both Matts were well liked and respected as team leaders. However, that "term of endearment" has come to an abrupt end. It is obvious that Father Leahy and his Sancho Panza, Mrs. McGillicutty, are going to do nothing. Meanwhile, Brady Hoke ljust made a statement that their will be four major superconferences and that the Big East will die and probably as well the ACC. That is what is going on behind the scenes and BC is "being hung out to dry" from a number of sources.