Will Reggie Jackson see any playing time during the NBA Finals? 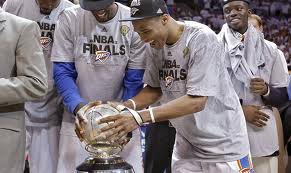 Reggie is close to the Championship, yet so far.

Reggie Jackson is four wins away from becoming an NBA Champion. Oklahoma City will be heavy favorites against whichever team wins the East and they will also have home-court advantage. The former BC star will have a front-row seat for most of the action. His problem? He's not likely to get on the court.

Jackson had a decent start to his first professional season. A short stint in the DLeague did not hurt his confidence or the Thunder's faith in him. They recalled him, played him again and kept him on the active playoff roster. Once the postseason started though, Reggie has not come off the bench. That's only natural as the games are tighter and the rotations get shortened. But still...of the 15 players on the Thunder roster, only two -- including Reggie -- have not logged a single minute of playing time in the postseason.

Obviously Reggie has value to the team and his teammates. He's part of the preparation and his contributions helped OKC get to where they are. With the games now at their highest importance, I don't expect Reggie to come off the bench and catch the world by storm like a Jeremy Lin. I do hope that one or two of the Finals games are blowouts and Reggie can get some official minutes.

It must be frustrating for someone like him. He knows he can play. He just can't get minutes on the NBA's best, young team. I think he'll persevere. Either another team will come sniffing or OKC will allow him to grow. Whatever his future, I hope he dose appreciate where he is. There are hundreds of BC basketball alumni who would kill to be part of an NBA Champion...even if they didn't play.

Darn, a BC woman is running in the national championships in the 800 in my city, but I happen to be in Beantown. I would love to cheer her on. It's a phenomenal track in a region second only to Oregon in track enthusiasts.

Reggie made the right financial decision to move on and I think he landed in a good spot. But Reggie is still too raw to be out there on the court right now. The one benefit he would have reaped from coming back to BC last year was that he would have been the focal point, the guy that people game planned for, and he would have logged major minutes. This might not have been good for the development of our current players, but it would have been great for Reggie.

As it stands, for rotation players, there just isnt much practice time this season. After the Fisher signing, I have a feeling that Reggie sat down with his coach and was told that he was going to not going to play meaningful minutes and to put more time in the gym.

The good news is that when he was in the D league he dominated. And he is going to get his opportunities because he fits the mold of what OKC is looking for. His time will come. In the meantime, he should enjoy the ride and make sure he knows what KD's favorite breakfast sandwich is.

I would give him till next year to warheads and learn the ways of the OKC fast paced offence. Check out my blog at www.theyakker.blogspot.com!

I don't think he's active. He's been at the end of the bench in a suit all series

ScarletEagle said...
This comment has been removed by the author.
9:54 AM

I say...celts v thunder. 7 games. Triple OT. All have fouled out except...Reggie and Sean Williams. Two Eagles go One on one for the NBA Championship!