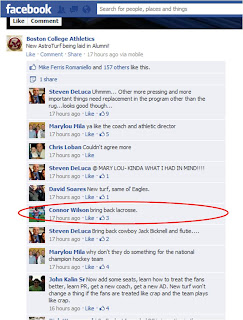 AJ's tweet brought the following comments on BC's Facebook page to my attention. After BC posted an update on the new field, Gene and Spaz's critics took to Facebook to vent. The usual complaints about both guys, tailgating and the state of the program filled the discussion. But what stood out to me was one simple comment from Connor Wilson: "bring back lacrosse."  I don't share the BC Lax community's mission, but I respect their passion. Lacrosse is never coming back, but that doesn't mean BC shouldn't hear about it every day.
Posted by ATL_eagle at 7/03/2012

Why not? Lax is a natural sport for BC to play, and the perfect sport to play in the powerhouse LAX conference: the ACC

Baseball is not a natural for BC and BC is awful. No baseball traditin at BC. No success. No prosepect of succcess - EVAH! Swiming bah. Diving bah

I have heard that BC wants an endowment of $35,000,000 to bring back lax. Are there alums out there with that kind of scratch?

On the flip side, not having a boy's lacrosse team does ensure that BC has 25 less lax bros running around campus. A drop in the puddle, but an important one nonetheless.

Just think of all the reserves from Duxbury we'd be able to recruit! (Starters would continue to go to UVA, Hopkins, Syracuse, etc.)

In all seriousness, it's very counter-intuitive for BC not to have a Lax program considering the demographics. I'm sure the guys in the "development" office would be in favor of it.

Mod10, I hear you on the development front. If we add lax, we really need to add squash and men's crew as scholarship sports as well. (Seriously, I'd be all in on the crew front, those were the hardest working athletes at the school when I was there.)

Are you ******* kidding me? You have women's lacrosse and not men's. There are 13 men's sports and 16 female sports because of Title IX. There has to be equal numbers of participants. The law could have been interpreted on a percentage of women wishing to participate. What you have as a result is a bunch of radical feminist women controlling the sports participation at schools such as BC and the same type of woman who participates. This is good for the new president of the board for BC. Father Leahy is a non factor. This is not good for the moral backbone of a once great country.

I think we should drop baseball, especially if the ACC breaks up. Use the extra money to hire a good football coach.

Lacrosse is out of the question. I played club lacrosse in the late 90's early 00's. We were nearly good as the Varsity team. It makes financial sense to drop Baseball and add Lacrosse. There is no competitive argument because lacrosse would get killed in the ACC. Plus lacrosse players are more trouble than baseball, basketball, and hockey players combined.

I would love to see BC beat the ever living shit out of The University of Virginia in lacrosse. That program is dirtier than UNLV basketball in the late 80's early 90's.

Mod34B - your love of BC athletics is so impressive you didnt even realize we cut the water polo team in 2002 (10 years ago). When we did have it, it did not have scholarships, the same as the swim team. The mens diving team is usually non-existent but when they do actually have a male diver, that individual is not on scholarship.

As far as baseball they have like 5 scholarships total that they spread out. I believe one or two of those may actually be from endowment funds set up.

JBQ, you needed quotes around radical feminist women that time. That is ridiculous. Maybe you'll change your mind when if you ever are a Dad to a girl or two: the sexual imagery/examples focused on girls is scary. Sports is an avenue open to them without that. The equal funding is just fairness. Maybe I'm a radical feminist. Shame Mary Daly wouldn't let me in her classes...

Bhill. Former swimmer? I think your speedo might be a bit tight!

I'm with JBQ. Title IX has wreaked havoc on girls' preparedness for marital servitude. Time spent on the sports field/court/gymnasium would be better spent mastering the cross-stitch, pot roast, getting out that pesky ring-around-the-collar and, of course, keeping the children clean and quiet.

Clearly, not all Eagles soar. Some just are sore.