Before I get to more AD speculation, this is some real news. BC will wear the following uniform October 27 vs Maryland. It is part of BC and Under Armour's efforts to support the Wounded Warrior project. Going back to what I wrote last week, if BC feels the need to depart from our normal uniform, I would like to see something like this: one off, with a purpose.  The players seem to like the idea too. 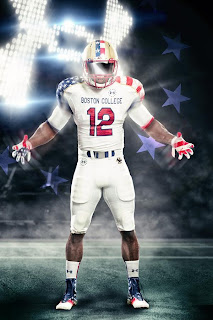 BC will play Georgia Tech at 3 pm on regional sports networks.

Finally BC will have a press conference at 1:30 on Tuesday. No subject was given but you have to assume it is to introduce the new AD. Speculation is rampant that it is Boo Corrigan or Quentin Williams. At this point I won't say much about either until I know things are official.

Now that is an alternate uniform...with a good purpose.

Is it possible that the presser is to announce Spaz is fired?

Ya know: just to make the start of the soon-to-be-named AD's opening days easier, less messy and more focused on building rather than negativity?

Ps. How did BC football get stuck with the self-appointed Mad Troll Blauds? Guy is out of his mind!

If Geogia Tech can fire a coach mid season why can't BC?

Mod-
The real kick in the junk comes at 1:30 today when Groh is announced as BC's new coach.

I would take Groh as BC's new DC. Fact is he was set up to fail coaching under a total A-hole like Johnson and then having to prep his defense weekly against a gimmick offense only to then have to face traditional offenses on Saturday's.

Now THAT is one of the worst uniforms I have ever seen.

per email from Leahy:

Brad is a 1981 graduate of the University of Michigan, where he played football and served as graduate assistant football coach. Subsequently, he coached for three years at the University of Colorado and then worked in various capacities in the athletics department at Vanderbilt, eventually becoming senior associate AD. He also earned a Ph.D. in education while at Vanderbilt.

Brad is thoughtful, a proven leader, and someone who understands and supports Boston College's commitment to excellence in both academics and athletics. I look forward to working with him, and I ask you to join me in welcoming him to our community. I know that he is excited to be coming to Boston College.

If he brings us football players like Big Ben, and fires Spaz immediately, it's a good move. Otherwise, time will tell.

Link to the press conference

Brad Bates? Where on earth did that come from? BC sure as heck did a good job disguising its selection. On a side note, those alternate uniforms are awesome.

Hi,
I read the most your blog post. I love the way you describe all the topic clearly. Keep it on.