Live Eagle!!! and other links 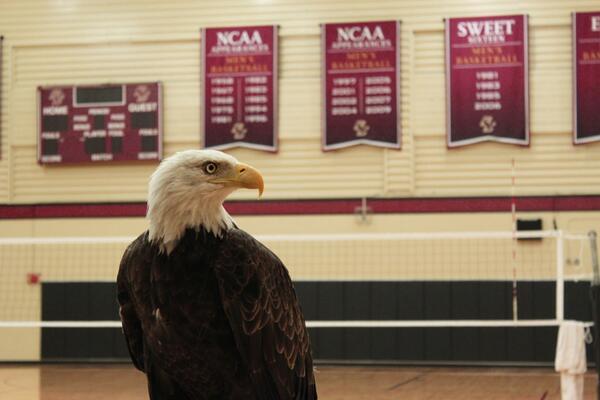 Brad Bates keep scoring points with the BC faithful. For years we've been asking for a live eagle mascot. For years were told it wasn't feasible. Not anymore. BC announced that for the first time in 47 years the school will have a live eagle mascot. There is also a fan naming contest for the bird. I don't think that this will suddenly get people to their seats on time, but it is the type of tradition building that is long overdue.

Matt Tennant is hoping to make the Eagles final roster. Will Blackmon signed with Jacksonville.

Here is a history of the BC-Villanova rivalry.

In his conference with the Philly media Addazio addressed his time at Temple.
Posted by ATL_eagle at 8/28/2013

I have a suggestion for a great, fun bird name (maybe an unofficial name) . No more crap names like "Baldwin," but a name that is about being a loyal, classy long-time Boston College fan; a true believer in all that is BC!

BJK would be nice. I liked reading about the BC-Nova rivalry. At one time, the landscape was dotted with Catholic Us playing football. Now, there are only 1.5 with Catholic being a bit iffy for the one rival of BC. It would be great to elevate Nova to D-1 status. They just need a place to play. They play in a bandbox and this is not acceptable to the "powers that be".

BJK would be nice. I also like the sound of "Archimedes" the educationally driven athletic bird who can raise our ranking in USNews and World Report. That's all the kids care about these days anyway. #sad (never use "hashtags") I preferred the days of excessive drinking and late nights in the Mods. Hopefully, that spirit will return with the bird!

I like Archimedes a lot MUD, except he was from Syracuse.

How about Milburga, the patron saint of birds

How about Jerry York? The name alone inspires greatness.

The Tolkien nerd in me would love to see it called Gwaihir.

This is kind of a cool name, but I don't know if BC would allow a name from a different literary/religious tradition:

Mod, El, JBQ and MUD - I laughed out loud when I saw your posts - too funny.

Give me a little time to think up a name.

I'm afraid to admit that when we last had a live eagle mascot, I was a student on the Heights. There are others as well - like Lenny.

The student handlers would release "Margo" and the eagle would slowly fly from one end zone to the other.

It was all very exciting and a great buildup to the opening kickoff.

Then one day Air Force invaded Alumni and they brought their falcon - the fastest bird of prey that exits, I think. What a show it put on at halftime, as we all yelled in good fun - Get him, Margo!

You forget that the day Air Force visited was the day that Margo, perched upon her over-sized saw horse, watched the little Falcons disdainfully until she decided "enough was enough" and launched herself. Margo dragged the saw horse by her tether...about 50 yards until her handlers caught her.

I still get a tear in my eye when I remember hearing she had died.

I fear BC would officially deny their existence as "non-mascots"; but there were two live eagles very briefly after Margo. They were called "Maroonie" and "Goldie" and were much smaller type of eagle. They had a temporary cage behind Alumni House, made of chicken wire. They were gone quickly, with no clear explanation; but ever after BC insisted we couldn't have a live mascot due to environmental red tape.

How do I know all this? They stored the "eagle food" in the basement of Southwell House in a locked refrigerator, next to our beer frig. One weekend the power was out and on Saturday we smelled a godawful, rank odor coming from the locked refrigerator. We had a mixer (booze party with girls and music to you yonkers) scheduled that night and dragged that refrigerator out onto the back lawn. It was leaking liquid which was "juice" from the thawing "Eagle food". The refrigerator got "dropped" and the pad lock "fell off" to reveal that Eagles eat dead rats and mice. [grin} I exercised my executive authority as Chairman of Southwell House and we pushed that sucker over the bank , where it rolled down into the parking lot.

A mixer - what a funny memory.